They said I was ‘normal’ 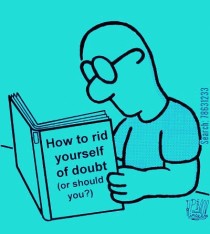 Sometimes I find it difficult to believe it when my doctors call me ‘normal’. They aren’t just referring to my survivorship challenges but also to my current physical health.

Why can’t I just hold on to the good news and move on?

I’ve been dealing with left hip pains since November. The pain only happened when I made certain stretching movements, which suggested it might have been muscular. But it started worsening during the holidays so I contacted my oncologist. Since Tamoxifen side effects can cause such pain, she recommended I stop the Tamoxifen for a week. I chose not to, out of fear. Instead, I went outside my hospital and saw an orthopedist. He took an x-ray of my pelvis and said my bones look normal. We both looked at the images as he explained.

The orthopedist suggested I receive physical therapy for 4-6 weeks and take some pain medication, in addition to using some hot/cold compressors 2x daily. After following his recommendations, I noticed the pain was not going away. I panicked, which seems to be happening even more frequently these days than when I had just stopped chemo treatments.

I contacted the orthopedist to give him an update and he suggested I get an MRI, which I got done earlier this week. After anxiously waiting for results, he finally called to tell me the MRI was also ‘normal’. I was so relieved. But only a few hours later I had decided that I would have my MRI slides sent to my oncologist for yet another second opinion.

What am I looking for? Maybe guarantees?

Here’s another example. Since my cancer diagnosis, I have been seeing two GYN specialists, one at MSKCC and one outside, because each provides me with different types of care. The first one is research-oriented so I get a lot of useful information and recommendations for cancer testing.

The other is my regular GYN doctor, who has also been monitoring me very closely since my cancer diagnosis, and whose care feels more personal, like a concerned friend. Thanks to her, I was able to get a pap test, which would not have been part of my hospital’s protocol to perform at the time.

After having two abnormal pap tests in the last 8 months, I decided to see my GYN at MSKCC to get her opinion. Here’s the thing though, technically this would have been my THIRD opinion, because right after getting my pap results from my regular doctor, and after confirming through a cervical biopsy that my cells were benign, I had also decided to see a surgeon at MSKCC and have him take a look at the slides. He too confirmed that my cells were benign.

How many confirmations do I need in order to…RELAX?

Going back to my recent visit with my GYN at MSKCC, while I waited in the examination room I thought of all the questions I had already asked the other doctors. What could she possibly tell me that is so different? I guess I need a lot of reassurance.

My GYN finally entered the room and asked how I am doing. I told her I am dealing with a lot of anxiety due to my recent pap results. She felt the need to comfort me. She spoke very slowly to make sure I followed everything she was saying—maybe her way to calm my nerves.

She says, “What’s going on? Talk to me.” I always feel excited when a doctor opens a door for discussion instead of brushing me off.

“Haven’t you looked at the reports, the ones from my other GYN? I had abnormal cells. I had to have a cervical biopsy,” I replied.

She tilted her head and gave me a sympathetic look, then said, “this…is…all…GYN normal stuff. You are normal.” Normal.

She says that I don’t have cervical cancer and that there is no need for my cancer hospital to be monitoring me all the time for that. She then told me that MSKCC wants her to focus only on cancer patients who are undergoing treatments, and to stop seeing ‘normal people’ like me.

What I found interesting is the number of times she used the word ‘normal’ during our dialogue. Her first and last words were, ‘you are normal,’ as if she was trying some kind of psychotherapeutic approach on me.

Could it be that I am exposing myself to too many cancer stories? Maybe more than I can mentally handle? Or perhaps I am a control freak. Or just scared and looking for guarantees. But there are no guarantees when it comes to cancer. One of my goals for 2016 was to let go of such attempts to control, and so far this hasn’t been the right way to start the year.

But, they say I am normal. I wish I could believe them.

How many doctors’ opinions do you seek for peace of mind or reassurance?

I'm Rebeca. I was diagnosed with breast cancer at the age of 32. But there's more to my story: I am an animal lover. I love to cook. I have a wonderful fiancé who doesn't mind walking my rocky path with me. We currently live in New York. ---------------------------------------- “Those who have a 'why' to live, can bear with almost any 'how'.” ― Viktor E. Frankl
View all posts by thesmallc →
This entry was posted in Coping after cancer, Paranoia and tagged Colposcopy, Control, Doubt, Fear, GYN, normal, Pap Smear, Recurrence, Tamoxifen, Trust. Bookmark the permalink.

28 Responses to They said I was ‘normal’