Reasons she was my mom 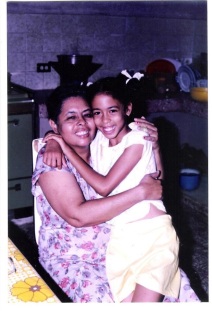 Today is Mother’s Day here in the U.S., but we celebrate it on May 31 in the Dominican Republic (D.R.), where I was born and raised by my grandma. But she was also my mom. My dad. My best friend.

My biological mother had moved to another part of the country to make a living so I hardly ever saw her. My grandparents took me in from birth. Eventually my mother moved to the States when I had just turned 7 years old. So, my grandparents took care of me for 14 years. But it wasn’t until recently, well, maybe a few years ago, that I realized that my grandma was more than just a grandmother to me. She was my mom, too. And there are many reasons why she was. But I will list just a few.

When I was growing up, I loved to eat a lot. I might have had an eating disorder now that I think about it. Right after eating a big lunch prepared by my grandma, I would gather some ingredients to continue cooking on my own, on a charcoal grill, without her knowing. I would get so sick after eating so much.

“Next time you get sick, I am going to visit cousin Alba and leave you alone so you can stuff yourself some more,” my grandma would say to threaten me. One time, she almost did.

Another day came when I overate and got sick. My grandma got dressed to visit her cousin Alba like she said she would. I remember sitting in the middle of my bed, throwing up and crying, as I saw her leave the house. I was scared. Not a minute had gone by, when my grandma turned around and came back in the house. She changed out of her good clothes and shoes and went into the kitchen to make me a chicken soup. Seeing how scared I was, she never tried that tactic again.

Going through puberty is tough. I was 10 when I started to go through this stage and it made me agressive. Damn hormones have always gotten me into some kind of trouble!

“I am leaving this house and not coming back,” I would say to mama whenever I was unhappy about something.

“Let me know because I am coming with you!” was her response.

“Oh yes, I can. And I will. I have a big suitcase where we can fit all of our clothes.”

I did not know what to say to that except I felt bad I said those words to her. Because I could see she really meant it — that she would never leave my side. She always had a way to calm me down with her loving words, instead of war words. And no one else could do that except she.

Then there was a guy named Pachico, that “liked me.” The problem was he was 19. I was 12. I developed early so I really looked 17. One evening, he stopped by the front of my house to read a poem he had written for me. I didn’t like him but I enjoyed the attention. A few minutes later, I saw my mama holding a pot with hot water in it. I had no idea what she was doing until she made a stop next to me and said to Pachico, “you see this hot water I am holding in my hands? If you ever come here again to bother my daughter, I will pour it all over your head.” I was embarrassed and he apologized. Pachico was actually a gentleman and very polite, apparently.

At all ages, from the time I was a child until I was a teenager, my mama always held my hand when crossing the streets.

When I moved to the U.S. at the age of 14 to live with my biological mother, my mama decided to come with me for the transition. She stayed with us for a few months. I was not completly happy with the sudden change, although I did want a normal situation for myself, to live with my mother and sister.

My grandma was so worried. Looked sad most of the times. This was also because I was a teenager. We all know that stage can be difficult and mine was, not only because I was in that transition age, but because I was removed from my home. To a new “home.”

When I moved to the U.S., I liked to be out all the time. This was the biggest challenge at home. I would come home by midnight (past my curfew) and everyone would be sleeping except mama. She would be up waiting for me to get home safely, just the way she watched over me when I was a child in D.R.

Mama also knew how to keep a secret. I could tell her everything about my life and I knew she would never reveal the information. I always remember her saying, “you are the master of your secrets and the slave of what you speak of.”

When mama got ovarian cancer, she was pronounced terminal. I was 19. She was 67. I went to see her in the D.R. for a week, something I regret, not being able to stay longer. But I spoke to her on the phone every single day, except one day. I was told she cried the day I didn’t call. She had asked for a picture of me to hold in bed. She asked her brother Toño, to shelter me if I was ever homeless.

The day before my breast biopsy, I had a dream about mama. She had only spoken to me in my dreams 5 times. In this dream, as she was staring down at the floor,  she said she knew about my biopsy. Then she lifted up her head and her face was full of tears. She then hugged me without letting go. I contuned to tell her I was OK. I was OK.

Thinking back again to that time when I first moved here, I had a really bad fight with my biological mother. My mama was in the house when it hapened. I was upset with her too. I yelled. I never yelled at my mama. Ever. Not until I moved here. She knew I was struggling, emotionally, although I never mentioned it. But she didn’t yell back. Instead, she went into my bedroom with me. Locked the door and said:

“One day, you will realize I am the one person who has loved you the most in this entire world.”

What do you say to that? I said nothing. I was too young to realize what those words really meant. And this is part of what’s making my grief so difficult. That I lost her during a time when I did not get it. A time with many struggles. Anger too. It’s a reason why I am writing my childhood stories about our lives together. Not just to let her know, wherever she may be, that she was right, but to also let her know that she’s the person I’ve loved the most in this world.

She is the reason I would consider adoption if I can’t have children due to my cancer. I see now the intensity of her love without even having given birth to me. After all, a mother is a verb, and not just a noun. She was both.

These are some of the reasons she was my mom.

Happy Mother’s Day Mama. I miss you. Every. Single. Day.

6 Responses to Reasons she was my mom