About my body and those residents 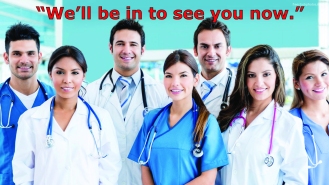 When I was diagnosed with BC, and I was having constant medical exams, I remember all the onco residents who surrounded me, as if they had just discovered gold, to examine me and ask me tons of questions about my health history. I was OK with it. In a way I felt that all this attention was for my own good. And it was a positive thing to allow the residents to study me because it would help future patients too. Residents need to train after all. But lately, I’ve become annoyed at all of them.

At one appointment last year, another resident saw me. She asked the usual questions about my health status, and proceeded with examinations. I walked out uncomfortable but not because she did anything inappropriate. However, she said things that showed she was not on the same page as my regular doctors. For instance, she was 100% against pregnancy after cancer and tried to discourage me, while my regular onco doctors are not against me trying. And it wasn’t the fact that this resident was against it, it was how she expressed her reasoning, which was not backed up by scientific evidence. I understand she had good intentions but receiving conflicting advice at the same cancer facility can be upsetting and confusing for a patient. I don’t believe my hospital would want to create such confusion for me. I made a note that next time I would let my hospital know I no longer want to interact with residents, but I let it slide.

This year, it happened again. This time there were two residents — a male and a female. They both asked questions and proceeded to examine me, simultaneously. This bothered me more than the conflicting opinion/misinformation I was given by the other resident last year. This time I got angry, and asked that only one of them touch me. Not their fault, I could have asked them both to leave but I didn’t. I am not intimidated by my hospital but I also wouldn’t want my care to be influenced if they start viewing me as too demanding or “difficult.” And that shouldn’t affect my care, right?

I’ve realized what the problem is. It’s my breasts. They are a sexual part of my body and although I know these interactions are for medical purposes, it still bothers me. I don’t want to be constantly touched by strangers anymore. I want my appointments to seem more normal than they are now. I want to be able to see my doctors and not feel like I am part of an exhibit or an experiment, for once. Because having cancer already makes me feel like I am. I know, I know, this is helping the residents become better – it’s training. Well, I don’t want to be part of it anymore. On top of that, I am already having a hard time feeling comfortable about physical intimacy as it is, and having all these people touch me makes the way I view my body even more complicated. I mean, my GYN, Onco, survivorship nurse, radiation doctor, residents, that’s a lot of grabbing. Don’t want it!

Perhaps if the cancer had been someplace else I wouldn’t feel as uncomfortable. I think having had this damn cancer on an intimate part of my body has really screwed things up for me, in so many different ways. Sometimes I wish the cancer would have been someplace else, even though breast cancer seems to have more treatment options among all cancer types – at least for early stagers. Of course I don’t really know the challenges of having a different cancer and I am not saying one is better than the other. I just feel this BC has been a big hit to my sexual self concept, and having too many people involved in my healthcare doesn’t make things easier for me.

19 Responses to About my body and those residents